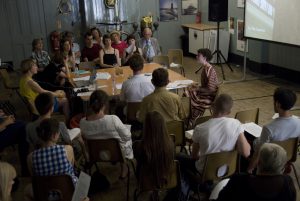 Richard Birkett’s recent projects have often focused on framing the production of art as much as its presentation in a given space. As such, alongside a consideration of artworks in a gallery setting, Birkett’s interests place an emphasis on live events and the social experience of culture – encompassing performance, speech and music. For his Whitstable Biennale event on the opening weekend of the festival, Birkett responded to the commissions and performances within the programme at large. The event, involving image projection and sound, also considered more generally the ways we talk and think about art.