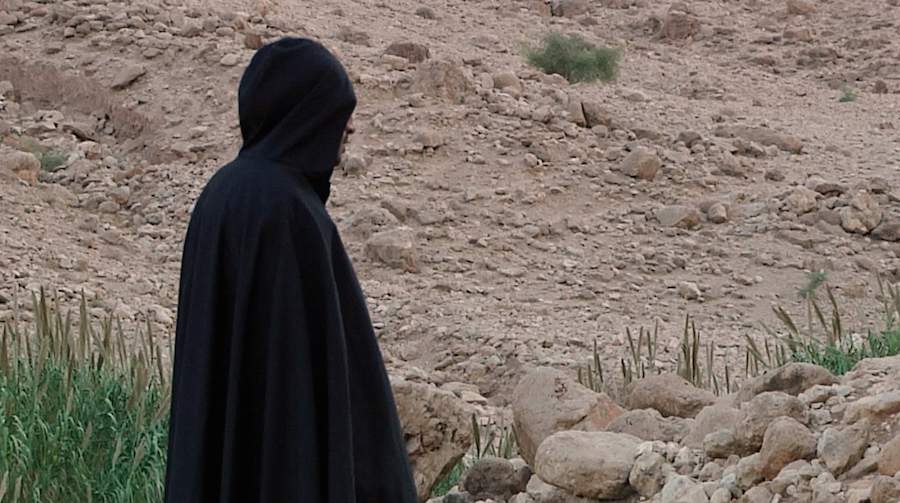 This programme of short films runs three times every day during the festival. The programme starts at 10:00, 12:40 and 15:20. Visit at any point during opening times. Free.

Sarah Beddington, The Logic of the Birds / 18 mins / 2015
The Logic of the Birds was inspired by early 20th century photographs of Palestinian processions, showing people moving freely across the land, as well as by a twelfth century Sufi poem about a group of birds who go in search of a leader only to realise, after crossing a landscape full of hardships, that collectively they are the leader they were searching for. The project began as a public processional performance with costumed actors in a remote valley close to the Jordan Valley – an area that is on a major trajectory for bird migration as well as being a route inscribed by infinite journeys of pilgrimage, exile and return. By working with a mythological story in the reality of occupied Palestine, the artist hoped to offer one of many possible scenarios in this controlled landscape that might open up a space for a potential future story yet to be created.

Ellie Kyungran Heo, Island / 28 mins / 2015
This film features an island at the southern-most point of South Korea, which requires less than an hour to cover its terrain. On the island, there are two extremely contrasting atmospheres, from crowded hordes to hours of emptiness. These emphasise its position geographically and psychologically as an island. In a filmic relationship, gazing at some residents on the island, the questions “Where are you now?”, “Why are you here?” and “What happened to you?” would be asked to the film’s subjects, audience, and the director herself.

Jessica Sarah Rinland, The Blind Labourer / 27 mins / 2016
The Blind Labourer examines the similarities and contrasts within the whaling and lumber industries. It edits together archive footage of labourers in the forests, at sea and in factories, felling trees, cutting whales and developing their multiple products for society and scientific studies. Text appears as subtitles throughout the film, written in the first person by an ambiguous whaler who comes to meet a blind lumberjack, fascinated by whales. The film rejects the idea that beings can be ranked according to their relative value, and explores each micro and macro form’s effect on one other.

Becca Voelcker, Island / 28 mins / 2015
Island traces the rhythms and routines of everyday life on a sub-tropical island thousands of miles southwest of mainland Japan. Setting out from this island, the film tracks ways in which diverse political agendas lie like sediment, and affect the bedrock of a place in terms of identity and language. While there might be shorelines on islands and borders on maps, it is through transgressions of these thresholds that each place revives its sense of self, time and again. In this way, Island concerns sense of place on a larger scale, inviting viewers to consider their own senses of place, and why it is that places carry such cargoes of memory, trauma, promise, and honour. Island was made during one summer, while Voelcker was living with a family on the island and participating in community events.

Xiaowen Zhu, Oriental Silk / 30 mins / 2016
Oriental Silk explores the worldview of the owner of the first silk importing company in Los Angeles. Carefully and quietly, the film observes this owner, Kenneth Wong, as he goes through his daily routine in the store and tells his story: how his parents, first-generation Chinese immigrants, realised the American dream through the store; how the once legendary store’s fortunes rose in close connection with the Hollywood entertainment industry, then fell with the proliferation of cheaper silk in the new global economy; how he himself came to be the owner of the shop and caretaker of the family legacy; and about his deep feelings for the shop, its history, and its future.

Simon Barker and Jason Wood, Always (crashing) / 14 mins / 2016
A Saab 900 makes a meandering journey through the spaces of a multi storey car park where cars don’t park, and stop only briefly before continuing. It isn’t clear if the car park is abandoned, simply underused, or standing-in for something else altogether and unspecified. The suggestion is of a parallel heterotopia where things are different in barely noticeable and unexplained ways.The film avoids any clear narrative, instead simply extending an invitation to enjoy the apparently aimless motion of the car through the non-places of the building. It is neither clear why the car is in the space nor why the outside world is remote and inaccessible. The intertitle quotes from J G Ballard’s short story Report from an Unidentified Space Station and implies the possibility that the car is on a journey of exploration, and in a way it is: measuring out space in its rhythmic movements. The driver never leaves the car, and we never hear the doors opening or closing. Like Lemmy Caution’s Ford Galaxy is it really just a car?

Jacob Cartwright & Nick Jordan, Off the Trail / 10 mins / 2015
Walk the path, sit the rains, grind the ink, wet the brush, unroll the broad white space… Lead out and tip the moist, black line.

Gary Snyder’s invocation to the muse of a Chinese scroll painter sets the tone in a short film adapted from the artists’ longer work, Headlands Lookout. Filmed in former US military barracks, and in the long-abandoned homes and circular library of Gary Snyder and Zen philosopher Alan Watts, Off the Trail follows a central protagonist, a soldier from another era, as he performs a series of actions and rituals. The uniformed figure paints Chinese nature symbols, chants, meditates and wanders dreamlike through a rolling Californian landscape of fog-shrouded hills, coastal defences and dense woodland valleys. Scenes are accompanied by haiku and poetry readings from Michael McClure and Gary Snyder, and the disembodied voice of Alan Watts, ruminating upon the passage of time and our perception of the ‘wild’.