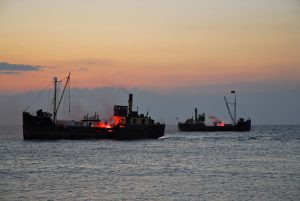 Richard Wilson is a sculptor and sound maker, who has been shortlisted twice for the Turner Prize. This Spring he installed Slipstream at Heathrow Airport – the largest piece of public sculpture in Europe. Wilson has, since 1983, as a member of the legendary Bow Gamelan Ensemble, been associated in co-creating a number of one off large-scale experimental music performances. Zatorski + Zatorski are collaborative artists working in the areas of video/film, installation, sculpture and photography, and have exhibited widely. Their ship, De Walvisch, is a fully functioning historic sailing vessel and the base for their extensive art project The Cultureship, which produces, commissions and curates high-impact artworks within a maritime context.

Ships paint the seascape with steam, smoke and light, setting a Turner-esque stage that will reverberate with the voices of lost ships calling. The vessels themselves have been modified to become playable musical instruments, each with the collected vocal cords of a ship of provenance, including from the HMS Ark Royal, SS Bretagne and the Rotherhithe Ferry. A mustering of local historic vessels, Whitstable Sounding begins in the last hour of light on the longest day of the year.

The performance will last approx 45 minutes. It takes place offshore and can be viewed from Whitstable’s beaches and the Harbour.

Produced by The Cultureship. With thanks to Rowland Humble, owner of the world’s largest collection of historic maritime steam whistles and air horns/sirens, who is kindly loaning part of his collection for this performance.