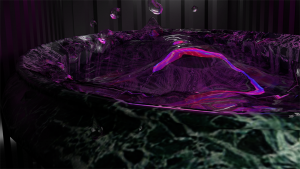 Kris Lock & Josephine Sweeney, The Vase In The Container (production still), 2018. Image © and courtesy of the artists.