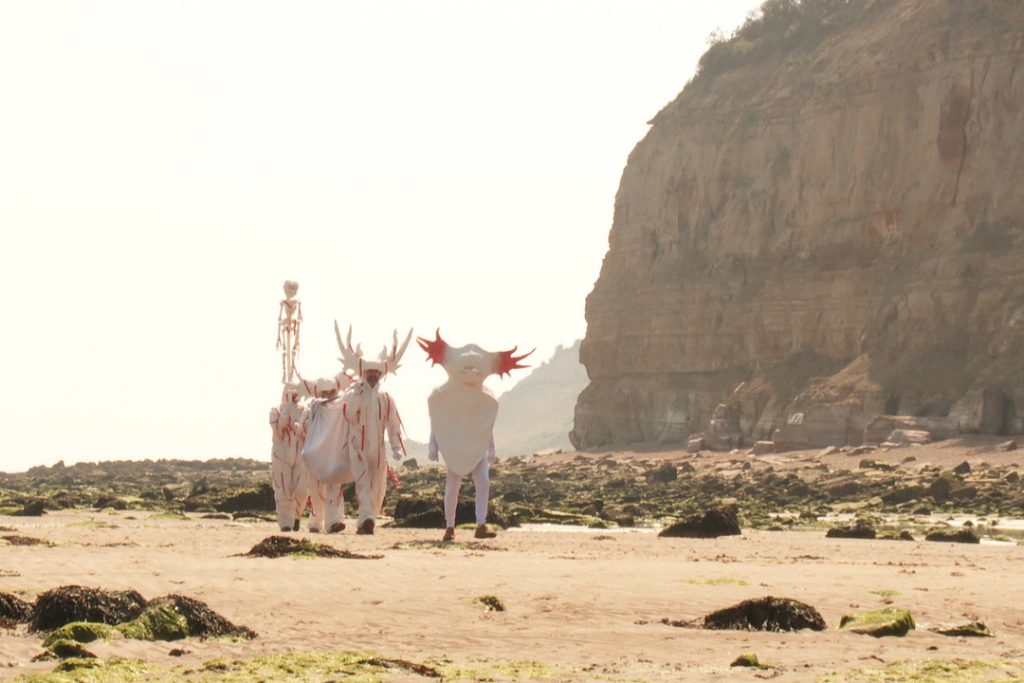 The Great Curdling is a Folk-Sci-Fi film accompanied by live performances and installation. Taking the form of a musical, with compositions by Leo Chadburn, the film explores the feeling that collective reality is at a tipping point. A conflagration of crises that are congealing into a queasy and unstable new story.

In the home of a middle-class family, something is not quite right. A defensive father is interrogated by an Alexa-like voice, and his answers build a picture of a world where ‘animals ended’ and mourning them is taboo. His family seem happy now they have consumed ‘The Substance’ – a transformative liquid technology that helps structure them – but something is going very wrong.

Meanwhile, on the shores of a strangely altered sea, two outcast women meet accidentally when one of them is attacked by autonomous flying packages. Expelled from normality because they would not consume ‘The Substance’, they sing about the Curdlings they have witnessed in their exile – some unspeakable intermingling of bio-tech horror and Fascism.

Although the sea is dying, it is also spawning something that could be new life – fantastical creatures that are half-cartoon, and take the form of tiny flexing hands. A funeral cult has formed, worshipping this new phenomena, and with their help, the exiled women are learning how to re-format the colonised, curdled bodies of the dead into a new substance.

The Great Curdling is 24 minutes long and screenings start on every hour and half hour. Visit at any point during the opening times.

Supported by the University of the Arts London.