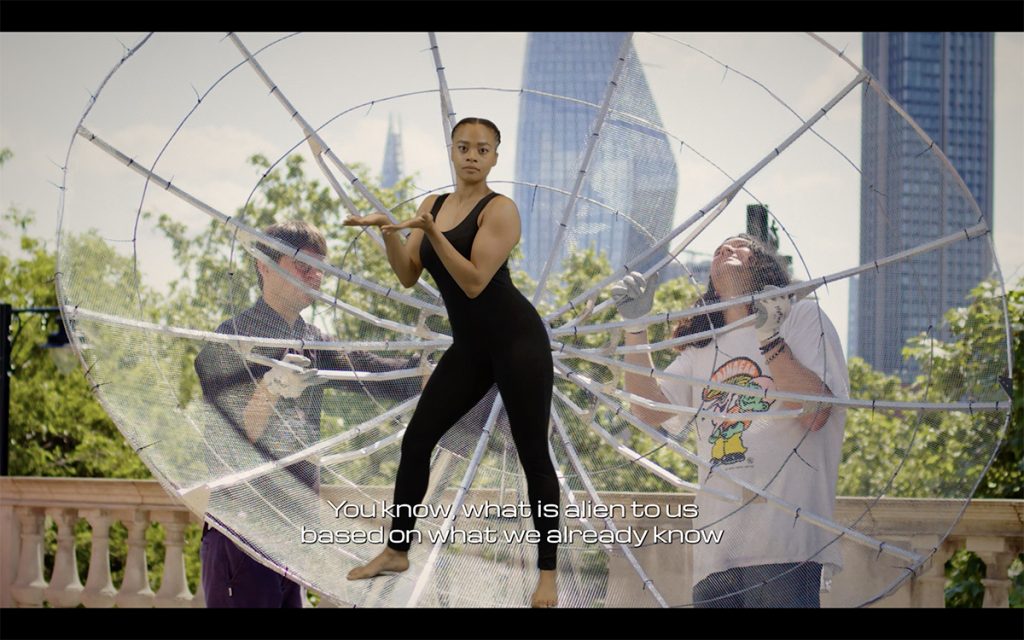 The second in a trilogy of works arising from Hailing Frequencies Open (HFO), an ongoing body of work, this video and sculpture installation continues Sonya‘s engagement with speculative fiction and mythologies of space.

HFO intersects the Greek myth of Andromeda (an Ethiopian princess, rendered white in Western art history, who has both a galaxy and a star constellation named after her), the dubious legacy of HeLa cells (the first human materials sent into space, taken from the body of Henrietta Lacks, a Black American mother and farmer), and actor Nichelle Nicols’ (Uhura from ‘Star Trek’) pioneering work in diversifying the NASA astronaut pool in the 1970s, as the starting point for an exploration of Black female subjectivities within fictional narratives of the future.

Sonya’s new video work, The Betsey-Drake Equation, combines conversations with physicists, performance based on a dance the character ‘Nyota Uhura’ performed on ‘Star Trek’ and the artist’s continued motif of the Andromeda Galaxy. Drawn together, these elements propose a version of the mythological Andromeda as a trickster protagonist of her own story as she builds a revolutionary space programme.

The sculptural elements, a constellation of vessels named ‘Betsey’, are based on Andromeda’s experiments in form, inspired by natural and constructed forms and mechanical processes. They are named after Betsey Harris, one of three named Black women experimented on by physician and gynaecologist J. Marion Sims in the 19th century. As with their sister vessel Anarcha (2019), these sculptures propose ways to monumentalize these women and reimagine the encounter between Black bodies and medical sciences through the science fiction trope of naming space vehicles after notable people from Earth’s history.