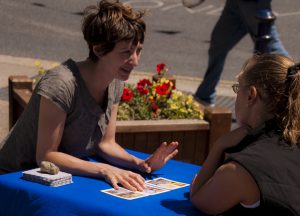 Telling cards was an interactive performance offering one-to-one card readings to visitors at an itinerant stall in public spaces around Whitstable.

The handmade cards and the readings performed by Natasha Vicars were based on retelling others’ anecdotes and recollections, as originally recounted to the artist in a series of interviews. These personal tales were on themes of ‘holding on to things’ and returning, and were gathered from a wide range of participants in Bristol, London and Whitstable.

Visitors to the stall were invited to form their own connections with the stories of these unknown others.