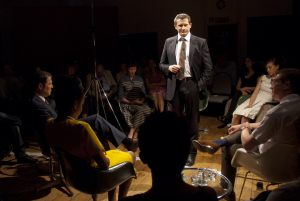 Stages in the revolution, curated by The Island (Victoria Brooks and Andrew Bonacina) was a series of projects that sought to create spaces for, and reflect on, the provisional communities that coalesce and dissolve across the three weeks of the Biennale. Their programme included Patrick Staff’s series of stages constructed around the working harbour area A factory as it might be, which, as well as functioning as new public spaces and an open invitation for impromptu performance, were also used as performance spaces for participants in workshops and discussion groups; Gareth Moore’s Children’s Films, an itinerant film project involving a set of short 16mm films made by international artists especially for children; and Jesse Jones’ The selfish act of community, a dramatisation of an an iconic encounter group therapy session.

Read more about Stages in the revolution in our online journal.