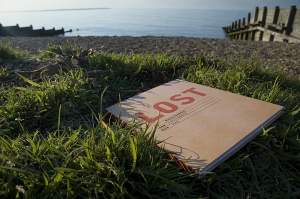 Simon Faithfull created a sculpture in the form of a limited edition book, entitled Lost, a simple but extensive inventory of objects lost over a period of 39 years. Lost catalogues the objects and strange stories of their individual departures. It could be found around Whitstable during the Biennale – on benches, in pubs, by the shore and on public transport. Rather then being sold, the book was disseminated in the same manner in which the objects took their leave.