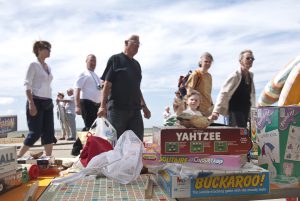 A stall stood on Whitstable beach with various games, toys and puzzles. Situated near several thoroughfares, passers-by borrowed games to play, asking for advice on suitability and rules. Cushions were also available to borrow.

Let the games begin looked at the beach as a place of communal recreation, asking what might count as evidence of recreational use while encouraging participation from groups of all ages.