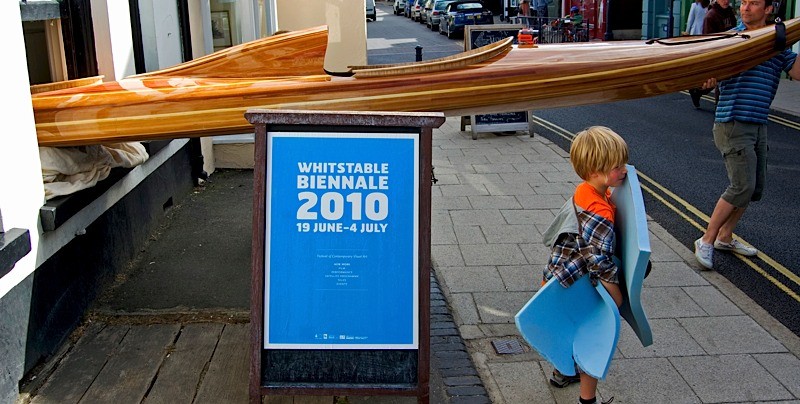 These three works were proposals, or dreams, for new ways in which we could engage with the hidden within our culture.

The video installation, The Pickers, presented the viewer with a group of Romanian Strawberry pickers, editing twentieth century, archive footage of hop-pickers. In the film, parallels are drawn between the two groups of migrant workers, connected by their common location of rural Kent.

The film, Echo, imagines a relationship between Governor’s Island, New York and Deadman’s Island, off the Isle of Sheppey, Kent, a burial site for people who had died on the prison hulks moored in the Swale in the Nineteenth Century.

Ghost was designed by Chodzko for visiting this ‘isle of the dead’. It took the form of a two-person, wooden kayak, built by the Whitstable-based, Glyn Edwards Kayaks. Ghost was displayed alongside the two videos. During the Biennale it was also paddled to the Isle of Sheppey, ferrying participants to Deadman’s Island. Passengers would lie down in the kayak’s hull, as though in a coffin, and were paddled by a ‘ferryman’.