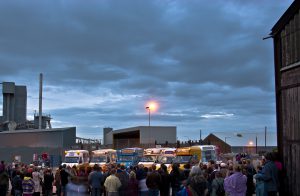 Fleet was devised by Chris Yates with music composed by Kelvin Pawsey. Vans from Honours Ice Cream became the main players in a musical piece for the opening evening of the 2008 Whitstable Biennale.

The ice cream vans arrived at dusk in Whitstable’s harbour on the longest day of the year to play a specially written piece for the Grampian Horn, composed and recorded on a twelve note Pixiphone. The Pixiphone sold in the UK in the 1960’s and was the self-proclaimed “World’s Best Toy Xylophone”.

British ice cream vans sound the way they do, that uniquely tinny sound, because they traditionally use ‘Grampian Horn’ loudspeakers pointed down at the road to disperse the sound. The performance began shortly after nine o’clock with the vans lighting their cornets and was followed by a fifteen-minute ensemble piece.

Fleet is the culmination of a long period of research by the artist into the ice cream trade. Yates even attended the annual trade fair and was invited to take part as a judge in the 2008 national ice cream awards.