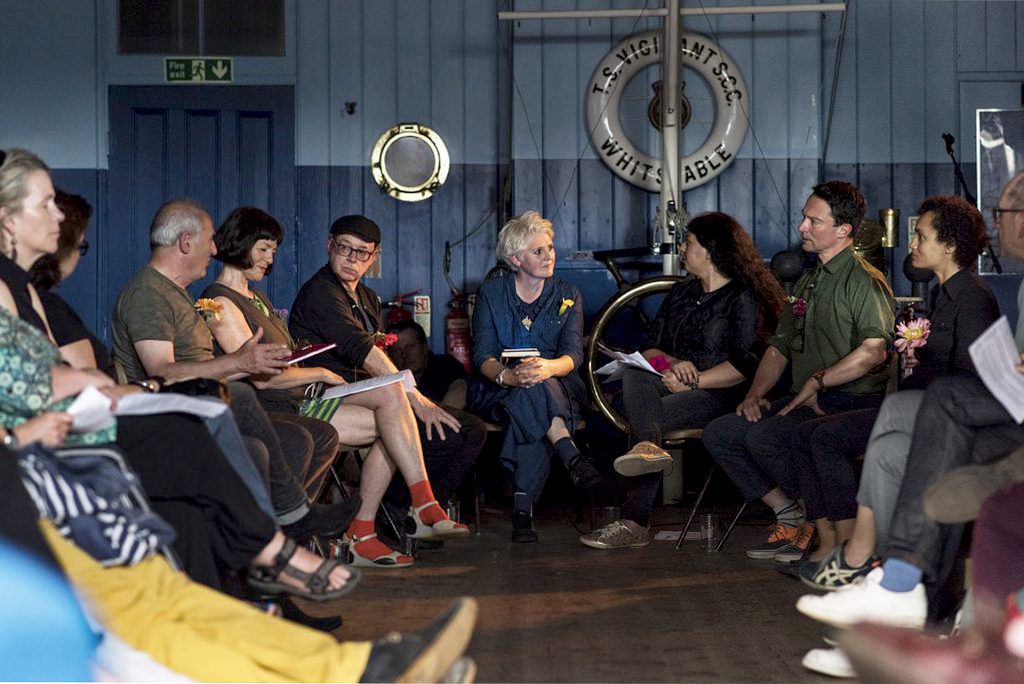 Watch video documentation of this work via our journal

Conference (after Attar) centres on a live conversation led by Caroline Bergvall with a quartet of speakers: a scholar, a poet, a calligrapher and an ornithologist. The conversation will ask how languages migrate and settle, how love poetry crosses histories, how traces create places, and the role of birds on the imagination. The title is an allusion to The Conference of the Birds, a classic mystic medieval work by Persian poet Attar, first adapted into English by Chaucer.

Set up ambisonically with sound artist Dan Scott, Conference (after Attar) develops into a cycle of sounds and local languages, including migratory songbirds captured on their return to Kent this spring. It also features a vocal composition for soprano Peyee Chen, written for Bergvall by renowned British composer Gavin Bryars based on medieval tonalities here reprised spatially.

The Conference of the Birds is a medieval mystical work by Persian poet Attar, composed of poetic sections, dialogues, conversations and parables in which allegorical birds are encouraged to set out on a spiritual quest. In keeping with this motif, our conversation explored ideas of journeying and asked how languages migrate and settle, how love poetry crosses histories, how traces create places, and the vast question of migratory and endangered species. Each speaker was asked to reflect on their own trajectory and how their practice and concerns might respond to the mystical initiatory journey set up by Attar.

Clyde Ancarno is Lecturer of Applied Linguistics at King’s College London. Her current research interests include inter-religious relations and discourses about the natural world. She was a researcher on the three-year project entitled ‘People’, ‘Products’, ‘Pets’ and ‘Pests’: the discursive representation of Animals, funded by the Leverhulme Trust.

Shadi Angelina Bazeghi, born 1974 by the Caspian Sea in Iran, is a poet and translator based in Denmark since 1986. Bazeghi has translated several collections of poems by the great Iranian poet, Forugh Farrokhzad, into Danish and has been a member of the editorial board of the Nordic Literary Magazine, KRITIKER since 2016. She is currently working as editor on an issue about translation (Timeless poetry without borders).

Geoff Sample is an ornithologist and sound artist, whose practice is built around managing a recording archive of European species and habitats and researching the musicality of languages across species.

Cherry Smyth is a poet, art writer and curator.  Her poetry collections include Test, Orange, Pindrop Press.  She is currently working on a project around the Irish Famine.  She writes for Art Monthly, among other publications.

David Wallace considers the allure of medieval poetic performance for modern poets (as an “unfinished” medium), and maps literary routes of travel across the premodern world; he also talks on small cruise ships while pondering their ecological impacts and while noticing other ships in the sea.