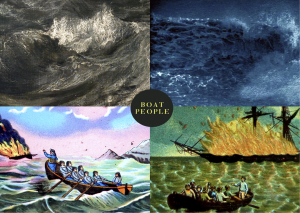 Sarah Wood, A Seaside Postcard, 2016. Image courtesy of the artist.