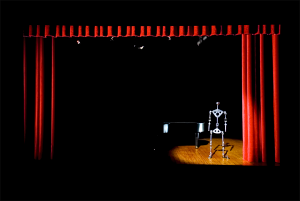 As it presents itself was a video installation by Ryan Gander, which exploited the medium of Plasticine animation. The work brings together characters based on the comedian Spike Milligan; curator Matthew Higgs; Mrs Frances Gander (the mother of the artist); the Lumière Brothers, Auguste and Louis, (who were amongst the earliest film-makers), as well as a generic animator’s armature. The characters seem to be auditioning for a piano piece, but they appear nervous and unsure of themselves and their reasons for being on stage.

As viewers, we are put into the position of a spectator within a gallery, within a film and in turn within the auditorium of a theatre. There is a tongue in cheek contradiction within the action and the narration; between the staged, the unstaged and the upstaged; the directed and the happenstance. As an investigation into the notion of entertainment, the work is an attempt to look at the relationship between performer and spectator and to rigorously discuss stereotypes within performing art.

Richard Briers provides a voiceover that acts as the work’s narration from the perspective of the characters involved, which also questions the intentions of the work. This rambling, questioning voiceover mirrors our own uncertainty as spectators. The characters seem to be in search of an author and meaning, lost in a theatrical loop. The work is subtle and understated; as funny as it is unsettling.