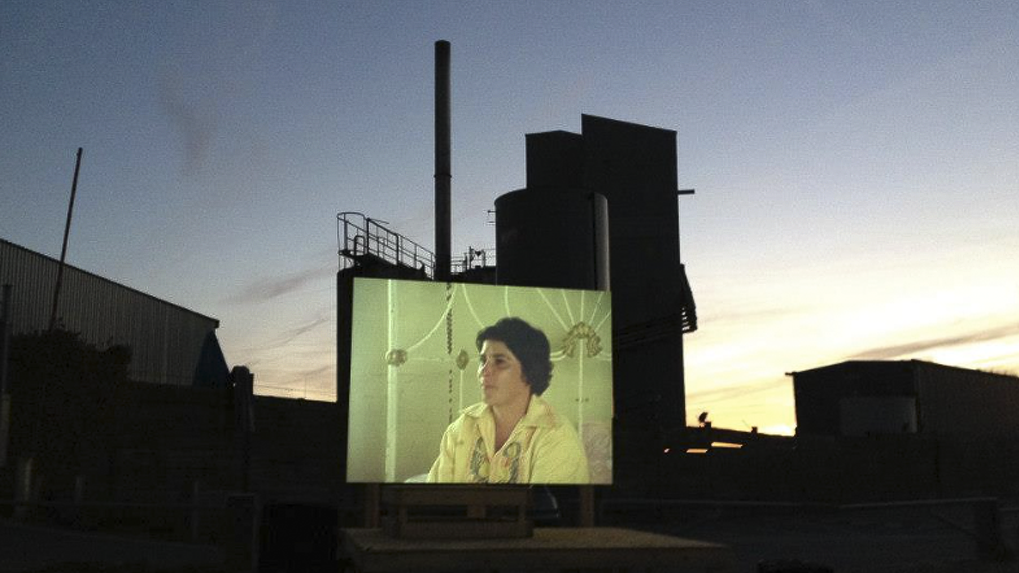 Stage in the Revolution, Word is Out presented by Little Joe, 2016. Image courtesy of The Island. All rights reserved.

A factory cinema was a temporary outdoor cinema in Whitstable Harbour, presenting artist’s films, documentaries and features every Saturday and Sunday during the Biennale as part of Stages in the revolution, curated by The Island.

Jonas Mekas filmed this Living Theatre production following the company’s final performance. The brig was an ultra-realistic depiction of a single day in the life of prisoners in a Marine Corps brig at a camp in Japan in 1957. The play was so precisely acted, Mekas was moved to film the production as if it were a documentary of real events.

Strike 1984 – A short programme selected by Margareta Kern as part of Patrick Staff’s project, A factory as is might be:

Side by side women organise
The Other Side Video Collective with the Nottingham Women’s Support Group, 1985 (Colour, VHS, 44 minutes)

This screening focused on the women’s activism and self-organising into a national movement during the Miners’ strike in 1984-5. It included the videos made as part of the Campaign tape project involving a network of community and activist group with the independent film and video workshops, in the making of documentary and campaign videos, in an act of solidarity and support for the Miners’ strike.

This event was followed by a workshop led by Patrick and Margareta, which took place on Wednesday 5 September, 18:00 – 20:00 at the Stages in the Revolution hub, 60 Harbour Street.

Liberation Films, selected and presented by Ed Webb-Ingall as part of Patrick Staff’s project, A factory as it might be:

Liberation Films grew out of Angry Arts, a film society run by Vietnam Solidarity Committee activists, and its core work was as a 16mm distributor, although it also produced films and ran screenings. In October 1968, 100,000 people marched through the streets of London in demonstration against the war in Vietnam. Six months later, only 4,000 turned out. End of a tactic? explores the significance of the big demonstration as a strategy and why it failed in this case to live-up to expectations.

Cinema for life: a feature from the Cinenova collection, selected by Cinenova working group.

Cinenova Working Group members Melissa Castagnetto and Irene’s Revell’s screening took its starting point from recent shifts in cinema culture; together with the audience they chose a cinematic feature film from the Cinenova collection to be screened.

Selected by Patrick Staff as part of his project A Factory as it might be:

Black Audio Film Collective followed the success of its first two screen ventures Handsworth songs (director, John Akomfrah, 1986), a film essay about the riots in Birmingham, and its first feature film, Testament (director, John Akomfrah, 1988) with another reflection piece, Twilight city. A drama documentary about the physical and social change of London that occurred under ten years of Conservative rule in the 1980s, it intersperses personal recollections from journalists and academics with a fictional letter from a daughter to her mother in Domenica.

Word Is Out: Stories of Some of Our Lives
Mariposa Film Group, 1977

Selected and presented by Little Joe

Working around ideas of collective filmmaking and drawing on the publication’s ongoing endeavour to (re)map the queer histories of cinema, Little Joe’s Sam Ashby presents a screening of Word is Out (The Mariposa Film Group, USA, 1977). Made by a group of six filmmakers, Word is Out was a groundbreaking activist documentary of its time that profiled the lives of 26 gays and lesbians of different ages, races and backgrounds during the then-nascent struggle for gay rights.