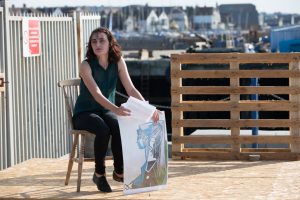 A Factory as it Might Be was a multi-part project by Patrick Staff that revolved around three constructed stages that circle the small aggregate factory in Whitstable’s harbour. From these stages, and alongside freely distributed pamphlets and an open working space on Whitstable’s high street, meetings, workshops, participatory research and discussion groups were undertaken considering questions of social exchange, labour and performance as well as the wider context of the Biennale itself. As well as functioning as new public spaces and an open invitation for impromptu performance, on two Sundays of the Biennale Staff presented a monologue adapted from a film by French workers collective Groupe Medvedkine performed by Laura Evans on each stage sequentially, with interventions from participants from the weekday workshops.
Staff also invited Banner Theatre’s 1st of May Band to perform their current production Fighting the Cuts! and artist Margareta Kern to collaborate on a workshop and present The Other Side – Strike 1984, a discussion and screening for The Factory Cinema.

Part of Stages in the revolution