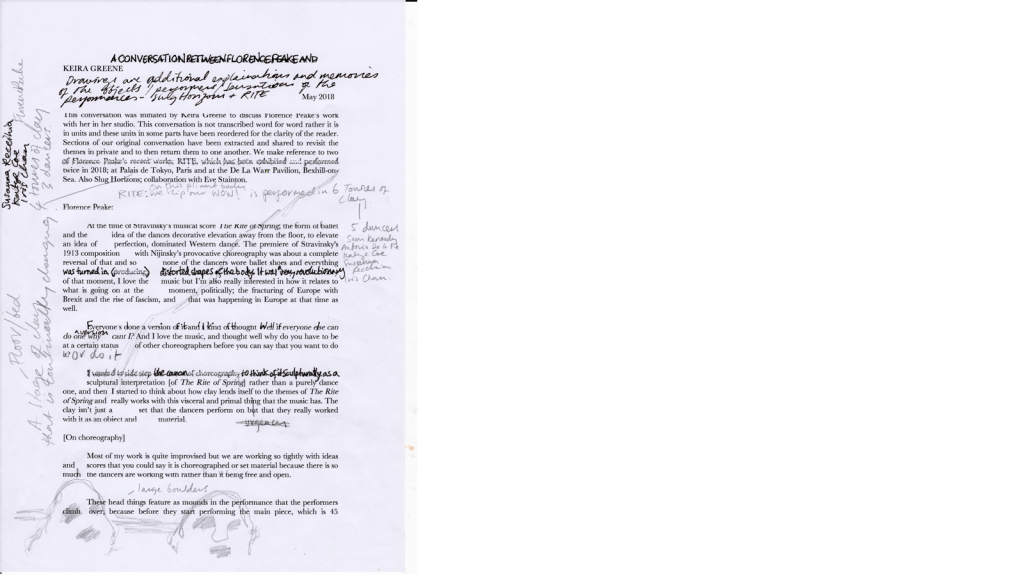 As a trained dancer Florence Peake’s background in choreography and painting stimulates a studio practice that is both diverse and immersive.

Through public performances and carefully choreographed works, Florence Peake challenges notions of physicality, loss and political concerns such as the commodification of art by the corporate world.

By encouraging chaotic relationships between the body and material, Peake creates radical and outlandish performances, which create temporary alliances and micro-communities within the audience

Keira Greene works across moving image and performance. Her practice questions embodied research as a methodology, often explored through the moving body and writing, often becoming a film.

She is concerned with deconstructing language and the translation of text and image as scores; she works closely with dance and dancers to develop her research.

She has exhibited and screened her work widely with recent exhibitions and screenings including Jerwood Space, Whitechapel Gallery, Tate, The Commons Bolinas CA. She regularly collaborates with Susannah Haslam, Jess Bunch and Tash Cox as the collective Co—.

She is performance curator for Whitstable Biennale and a founding trustee of the Stuart Croft Foundation.

A Work-In-Conversation by Florence Peake, a Studio Visit with Keira Greene