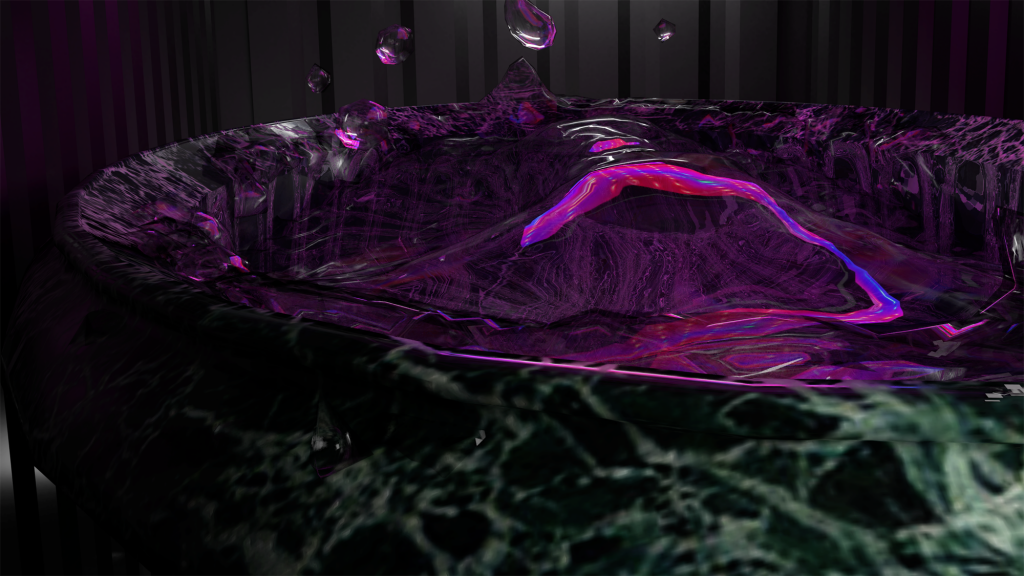 Kris Lock & Josephine Sweeney, The Vase In The Container, 2018. Digital video still © and courtesy of the artists.

Kris Lock and Josephine Sweeney are young artists both based in Margate. Lock’s practice, focused mainly on painting, sculpture and video, explores the different mechanisms and components that underpin socio-political geographies. Often speculating on future or alternative relationships to places at the intersections of currency, technology and materialism. Recent concerns have been centred on oceanic territories, artificial islands and libertarianism. Sweeney is an artist working in sculpture and sometimes video, sound and performance. Her work is often motivated by thinking on how mythic themes and industrial processes exist together. She is particularly interested in how architectural monuments operate. Currently she is investigating the idea of globalisation – from the transnational stories of scam emails to trade networks and shipping lane. Their collaboration, The Vase in the Container, was commissioned by Whitstable Biennale 2018.

Paige Lyons: Could you describe your piece ‘The Vase in the Container‘. What was the initial brief, and how did your ideas process and develop?

Kris Lock: Whitstable’s proximity to Sheerness first sparked our interest in the container industry and the proliferation of freeports. The film was the end result of our research, which attempted to reimagine some of the hidden spaces, mechanisms, dialectics and frictions that exist as a result of networked and globalised economies underpinned by the standardisation of cargo mobilities. These mechanisms were conflated with various mythologies relating to the fountain of youth and the multifaceted and hidden otherworld that was said to contain it.

PL: How and why did you decide to collaborate together for this piece, and how did you find the process of working together?

KL: We had worked together on a number of workshops and events, developing a shared practice exploring industry myth, conspiracy and geography. I was interested in working together on something more tangible.

Josephine Sweeney: A good deal of the work was done long distance over google docs – sharing research, writing or editing back and forth. That’s partly what led us to use the message board structure in the film – the back and forth of conspiracy speculations in the film’s narrative is kind of similar to our own writing process.

PL: In the video we follow the journey of the sizeable Kolyvan Vase, what drew you to this vessel specifically and its location?

JS: I’d visited the Hermitage in St Petersburg a few years ago and had overheard a tour guide explaining that this vase had been hauled into place before the building walls got constructed around it. The story of this grandiose object trapped by the grander still building (the doors were too small / the vase too big for it to ever leave the room) felt a bit tragic, and stuck with me.

When we started talking about shipping containers the vase came to mind, both because of its proportions (roughly 8 x 8 x 20 ft – the same as the standardised container) but also because it already has all these ideas of containment hovering around it – being trapped in the Hermitage and being a defunct container itself.

PL: Did you always imagine the video to be installed in a container, and how important was this to your work?

KL: The film being shown in a container was a part of our proposal from the beginning, it was both a reference to the themes within the film, and  a response / solution to the limited, varied and often interstitial locations throughout Whitstable in which the Biennale’s artworks and events take place.

PL: I read that you are both currently interested in hidden spaces within your practices, from shipping routes to scam-emails, what is it about these unseen spaces and journeys that interests you both?

JS: I find the way those things so blatantly obscure themselves intriguing. Scam emails often get crafted to be so absurd that only the most vulnerable recipients get ‘fooled’ by them. The shipping container conceals itself by its shear ubiquity and uniformity – or by existing in restricted edge zones.

KL: I am interested on the influence these spaces have on things that are visible. As the world becomes increasingly more complex, hidden infrastructures become increasingly enmeshed in the fabric of society; creating new power structures, collapsing time and space and providing escape routes and alternative spaces.

PL: In the end of the video the Kolyvan Vase is shown to become an environment for hydroponic growing. Not many people know about this method of farming! Can you tell us more about it and why it’s a theme within your video?

KL: Hydroponics first entered into the project when we were researching global east- west trade imbalances – the majority of goods are produced in the east and shipped to the west, and this imbalance coupled with the cost of container storage leads to an excess of empty containers that circulate the globe. A few startups are trying to capitalise on these cumulatively vast spaces through hydroponic farming. There is something quite compelling about these automated incubators replete with soft pink grow-lights and viscid nutrient fluids. Left to their own devices you can imagine them bubbling over and transmuting the spreading flora into otherworldly elixirs.

PL: While you were associates at Open School East You both lived in Margate, a Kent seaside town close to Whitstable. Has the location influenced your practice?

KL: Proximity to the sea has definitely influenced the direction of my practice, a lot of my work touches on oceanic space.

JS: Yeah, I think there’s no escaping surroundings entering and influencing your thinking. And Margate’s geography as this edge point with so much coast and horizon around you gives a certain feeling. There’s a kind of urban myth that the flashing lights on top of wind farms are code for ‘I am a wind farm’. I think people like to share that story because it’s funny, but also because it’s good to think that there’s things out there communicating something back. I always found it a comforting idea. Anyway, I guess there’s something of that same gesture in our film.

PL: The journey of the vase in the film is fictional, which made me reflect on things like ‘fake news’ and the way scam emails have become more sophisticated, presenting even more believable worlds to get sucked in by. I began to question fiction and reality within the film as a whole – is this intentional and how plausible did you want the story to be for viewers?

KL: We intended to tap into conspiratorial thought spaces in which facts are often twisted to suit a theory, and explored the way in which input from multiple agents can help to reinforce and normalise theories. it was interesting to see how the film developed in that way, with lots of elements being recontextualised and tweaked as the story progressed.

JS: I don’t think I agree that scam emails have become more believable, I think their sophistication lies more in their calculated absurdity – intended to catch the most vulnerable readers. I suppose, for me, it’s more a case of the proliferation of these fictions, the way they feed one another, and how the drama of fiction is so much more seductive and even comprehensible sometimes. The film merges online conspiracy and references to historic myths, which is nothing new, but I’m interested in the shared legacy of these tales.

PL: Lastly – do you have any future projects planned, together or separately we should know about?

JS: The rest of 2018 involved a lot of thinking and figuring things out. 2019 feels like I’m getting there. We shall see.