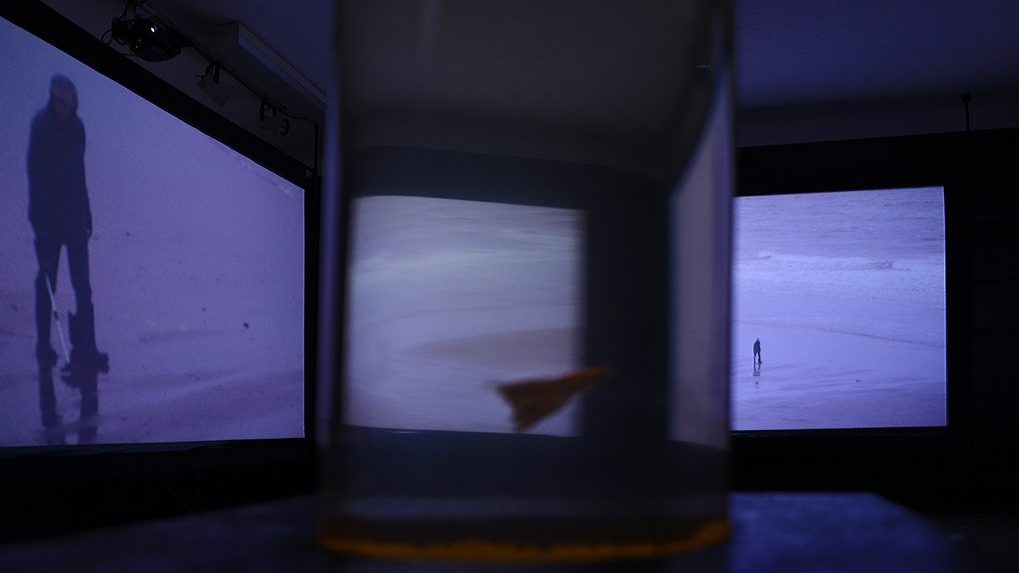 “To be truly radical is to make hope possible, rather than despair convincing.”
Raymond Williams, Resources of Hope.

Caitlin and Andrew Webb-Ellis are artist filmmakers. They are currently based in Scarborough where they have a studio residency with Crescent Arts. Webb-Ellis produced Parlor Walls for the 2016 Whitstable Biennale. Inspired by Ray Bradbury’s 1953 novel Fahrenheit 451, which is set in a dystopian future where books are banned, the film they produced features a diverse range of people and locations, from webcam footage and interviews with beachcombers to shots of a grey sky seen through the branches of a winter forest. Parlor Walls was shown in Whitstable Library, on three screens which surrounded armchairs and a fish tank.

Ben Hawkins: Could you describe your piece for the 2016 Whitstable Biennale, Parlor Walls? What was the initial brief? How did your ideas and process develop?

Webb-Ellis: Parlor Walls is a 20 minute looped three-screen installation which takes Ray Bradbury’s novel Fahrenheit 451 as a starting point to explore alienation in the digital age, and the strangeness of contemporary human experience. The book was a way in for us, to start exploring this sense that the internet and technology was fundamentally altering the way humans communicate and live together in the world.

The development of Parlor Walls was very much down to chance encounters and coincidence, as it is with most of our work. At the start of the project, Caitlin’s sister had moved away from everyone she knew for a new job, and like many people was living a very solitary existence. Through Caitlin’s sister, we were introduced to the YouTube phenomenon of ASMR [Autonomous Sensory Meridian Response]. There are millions of people watching and creating videos designed specifically to comfort the viewer through soft whispering, tender eye contact and touching of the screen. The sound is recorded binaurally and is designed to give a tingling sensation to the viewer or listener. This desire to connect, to have your body addressed, to feel the physical touch of another, is apparent in the popularity of the videos, and this became the basis of the project.

We set up a YouTube channel of our own quite early on. We started creating videos with Caitlin appearing as an alter-ego, Mildred, and interacting with viewers. We got over 600 subscribers and 30,000 views, and the immersion in this online community and conversations with people creating and watching ASMR all over the world, informed our thinking.

As usual, there was a physical journey involved. In Fahrenheit 451 the main protagonist, Montag, escapes from the city at night by way of the river, floating into the countryside and silence. A lot of our research hinged around this powerful scene.

We began with a journey down the river of my childhood, the river Esk, which runs into the North Sea near Whitby. We swam, waded, squelched and floated our way down the 28 miles from source to sea, and in the process discovered the incredible story of the European eel’s migration which became a key part of the project.

These elements are seemingly disparate, but it is the web of connections and associations that we’re interested in, how we fill in those gaps. I’d say our overarching interest is how humans understand our place within the world at large.

BH: The Biennale is sited in unusual venues and attracts a broad audience. How did you plan your work for the space, the context of the library, and the Biennale’s audiences?

W-E: Whilst we were making the work we visited Whitstable to look at spaces. The library was suggested as a possible location and of course that immediately sparked our interest in relation to Fahrenheit 451 in which books are banned and the only way to save them is to memorise them by heart. It is a fantastic space, right in the heart of the high-street.

What we also really liked about the context was that there is an openness to the public library – it is for everyone already which makes it easier and more inviting for people who might not usually go to see art.

Working with installation, we are quite used to putting our work in unusual spaces and this process really excites us. Each space brings its own challenges, scale, smells and ways of entering the installation space.

The install provided some challenges as we couldn’t hang screens from the library ceiling as we had imagined. We were incredibly lucky to be able to work alongside a really fabulous group of students for a week at the University of the Creative Arts, in Canterbury, to troubleshoot these issues and come up with a custom system for hanging the screens in the library. It’s all part of it for us – we like the practical challenges and it’s interesting how these also shape the work.

BH: You’ve been based in Scarborough which is a seaside town, like Whitstable, and films such as Parlor Walls, Mother and I am Going have water as a central feature – are you drawn to rivers and the sea?

W-E: Yes, water seems to find its way into most of our work. Caitlin grew up on the north east coast and has a strong relationship with the sea. There is something so universal and timeless about water, and it can take on many different meanings. We are interested in water’s relationship to time and memory, and how it both connects and divides. It’s nice to have something in our work that anyone can relate to in one way or another; water is a leveller and connective fluid running between us all.

BH: How did you meet? Have you been working together from the off? Do you find collaboration freeing or restrictive?

W-E: Our collaboration started on our degree course. All our work seems to stem from this interaction, from the coming together of two minds – two perspectives – and the space that opens up between two ways of seeing the world.

Almost everything we make begins with the body, with our bodies, and usually involves physical struggle of some kind. It’s part of making the work – sometimes it comes into what is seen in the films and installations, and sometimes it is a sort of research.

This more direct way of exploring ideas is central to our approach. We don’t come to our work from a theoretical or academic angle. What emerges day-to-day is the main source of all material in our work. We make work mainly out of a desire to make sense of the senselessness of life, an attempt to give a chaotic order to what little we can understand.

We live together in a converted minibus, and have done for the past 6 years. It is what enables us to get around, and make our work in the way we make it. We live on the public highway, and wake up every day in a different location – even if that is within one town.

It started as a means of survival, a way to work full-time on our practice, but we have come to realise that the viewpoint it offers is a very privileged one. We’re definitely not outside mainstream reality, but just slightly on the outskirts – again it’s about that slightly altered perspective, the ability to see the world from more than one viewpoint.

Life in the bus exposes us to different situations – from the day-to-day need to fill up water, empty toilet, charge batteries – to something more elemental, to do with the body again; sometimes struggling to keep warm, waking up with ice on the windows, hearing strangers moving around just metres from your head as you fall asleep. We feel that this life in the bus, our collaboration, are all somehow part of the work.

BH: Your works often use three screens, why?

W-E: We’re very interested in the idea of working with the physical space of the installation, and extending the reach of the screens in different ways to bring the viewer into a slightly altered relationship with the work.

We both love the cinema, and that is a very special space to view film, but we find that using multiple screens allows us to work with the moving image in ways which challenge our use of visual language and alter the viewer’s expectations just enough to give us more freedom.

The collective human search for meaning underlies our work, and making films across multiple screens mirrors this lack of inherent meaning by refusing a definitive viewpoint. It allows the installation to reflect the way time and memory are structured, encouraging complex and intricate associations within the flow of imagery. The number of screens isn’t particularly significant, but there is something beautiful about the balance and symmetry of the three screens. We’re currently exploring new configurations of screens.

BH: On your website you describe Parlor Walls as being about the ‘interconnected world’ and ‘alienation in the digital age’. With events since, there’s been a lot more talk of ‘echo chambers’ and ‘fake news’ etc. Has this altered the way you think about connectivity, and how you explore it in your work?

W-E: As we prepare to show Parlor Walls again at the Aesthetica Art Prize exhibition, almost exactly a year on from Whitstable Biennale, it is interesting to sense how the context of the work changes as political and social realities shift.

Like most of our work, Parlor Walls grew directly out of the subjects that were preoccupying our thoughts and conversations. Showing the installation at Whitstable Biennale was a moment where the ideas crystallised temporarily in our ongoing exploration of these subjects – a manifestation of where our thinking was, at that particular point in time. We’re excited about continuing to work with the themes of human connection in our current project.

BH: Your work is frequently described as ‘optimistic’. Are you optimists?

W-E: We would always like to think that our work provides a glimmer of hope within it. Rather than being particularly ‘optimistic’ we are driven more by a desire to produce something authentic – to be brave in the face of a crazy and confusing world.

BH: What have you been working on since the Biennale last year?

W-E: This past year has been full of surprise gifts. Early in 2016 we were selected by Susan Hiller to be mentored by her as she produced her new work for Culture 24’s ‘Museums at Night’ programme. Due to unforeseen circumstances, Susan handed us the project to take over. Inspired by Susan’s work, and her Homage to Joseph Beuys series, we led two community pilgrimages to ancient sacred wells in London and North Yorkshire to collect special water samples. These shared walks, and our documentation of them, form the basis for the installation, An Empty Vessel, which premiered as part of Visions in the Nunnery in October 2016.

We are over the moon to be working with Siobhan Davies Dance in London on a new commission to be premiered in March 2018. We will spend extended periods at the studios over the course of the project, engaging in all that goes on there and even taking part in dance classes. Our practice has long involved the moving human body, but we have not had the chance to study this in detail until now. The generosity of this organisation is huge and the conversations and encounters we have throughout the year will shape our work.

The project so far contemplates an encounter between Neanderthals and Homo Sapiens where proto-linguistic communication and gesture made interaction possible. This meeting offers ways to explore coexistence and human belonging and to question deeply held myths and stories relating to the body and evolution. The thinking behind the work leads directly on from Parlor Walls and flows in new and exciting directions.

Ben Hawkins is studying for an MA in History & Philosophy of Art at University of Kent, and is a Whitstable Biennale Intern 2017.