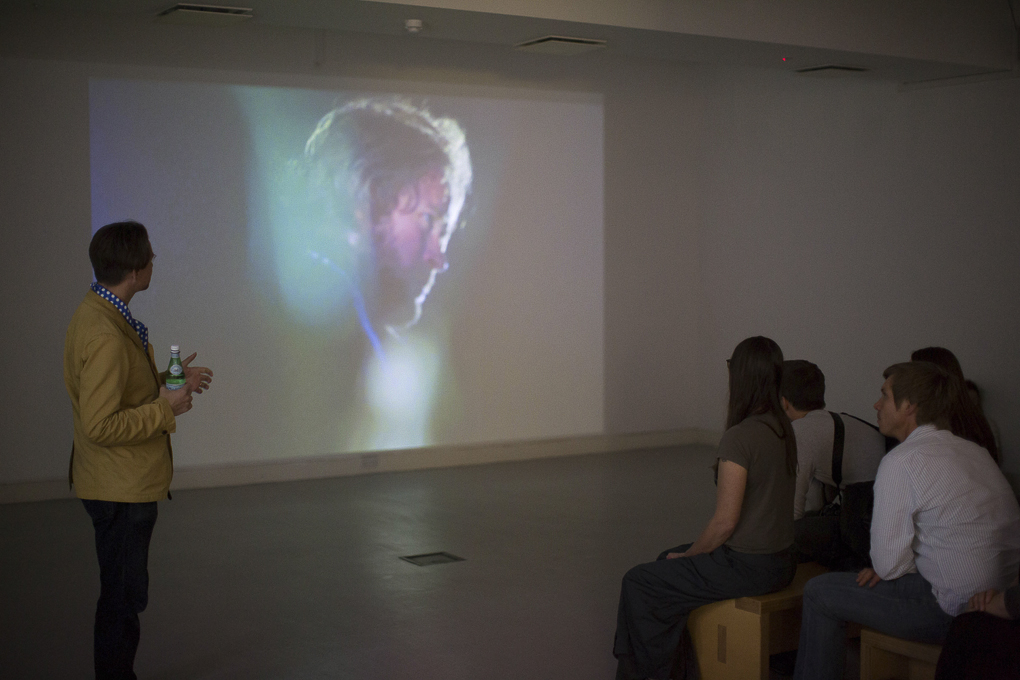 Jeremy Miller, in discussion at Speak Near By, 2012. Photograph by Simon Steven.

Speak Near By was an exhibition of new and classic artists’ film and video that explored the intertwining themes of rituals, dream, dance, and possession. These are works of transformation, and within them it is often the human body that is transformed, performing these acts or, in turn, being performed upon.

The presiding spirit in this exhibition was the American film-maker Maya Deren, whose trance-like films are often considered the very birth of experimental cinema. Deren died in 1961, at the age of only 44, but her films, and writings, have influenced subsequent generations of artists. Her interest in dance, anthropology, and ritual was profound — her book on Voodoo in Haiti is considered a classic work — and she considered her film-making as a form of choreography. This is evident in her work Ritual in Transfigured Time (1945–6), in which out-stretched arms draw people into various scenes and movements, and us with them, an invitation to surrender ourselves to a movement beyond us.

A similar sense of abandonment can be found in works by Joachim Koester, and Shezad Dawood, which were also included here. Koester’s film Tarantism (2007) refers to the condition found in southern Italy, resulting from the bite of the wolf spider, or tarantula. The symptoms include restlessness, and convulsions, and at one time it was thought that the condition could only be cured through a form of frenzied dancing, called the ‘tarantella’. It is this dance — or anti-dance — that provides the basis for the movements in Koester’s film.

Dawood’s New Dream Machine Project (2011) reflects the artist’s interest in Brion Gysin, the artist, writer, and associate of William Burroughs. In the Cinémathèque de Tanger, Dawood created a monumental 3m-high version of Gysin’s ‘Dream Machine’, a spinning open drum structure of movement and light that is said to lead the viewer into a ‘hypnagogic state’, or one between wakefulness and sleep. Dawood’s film is a performative record of his part recreation of Gysin’s own legendary event in 1968, in which Brian Jones and the ‘Master Musicians of Jajouka’ performed at Gysin’s coffee bar ‘1001 Nights’, and its viewing might be considered an attempt to transport us not only into another mental state, but another time and place, also.

Derek Jarman’s 1977 film Jubilee begins with a transport so audacious that even Gysin might have balked: that of Queen Elizabeth I four-hundred years into the future, and to a London that has become a wasteland, drenched in violence, littered with decay. We soon meet ‘Amyl Nitrate’, whom Jarman describes in the script as a ‘punk intellectual’, dressed in twin-set and pearls, spiked hair and zig-zagged make-up, as she attempts to educate a gang of violent young women who have been rounded up off desolate streets at the point of a gun. Her reading, from a book, introduces us to a world that is less dream-like, and more nightmarish, the result of an ability for people’s desires to be made reality, rather than be sublimated as art. Yet it was then, she says, that she started to dance, wanted to defy gravity, and we cut to a scene in which, dressed in a traditional ballerina’s costume, she dances around a large bonfire alight on a piece of derelict urban wasteland.

Jarman edited this section from a longer, 12 minute super-8 film, Jordan’s Dance (1977), so-named after the woman who plays Amyl in Jubilee. Like a tutu’d moth, Jordan dances around the fire, observed by the masked figures of Art, and Death, yet there is no reverie here, none of the light-flickering ecstasy to be found even with Gysin’s ‘Dream Machine’, (and what is that, if not a mechanised fire, designed to take one out of oneself at 78 rpm). The fire in Jordan’s Dance is no useless expenditure, however, to be ‘promoted, raised, displayed and burned in vain’, as the philosopher Jean-François Lyotard described the erotic force of art. No, here the fire has a use, and it is to burn books.