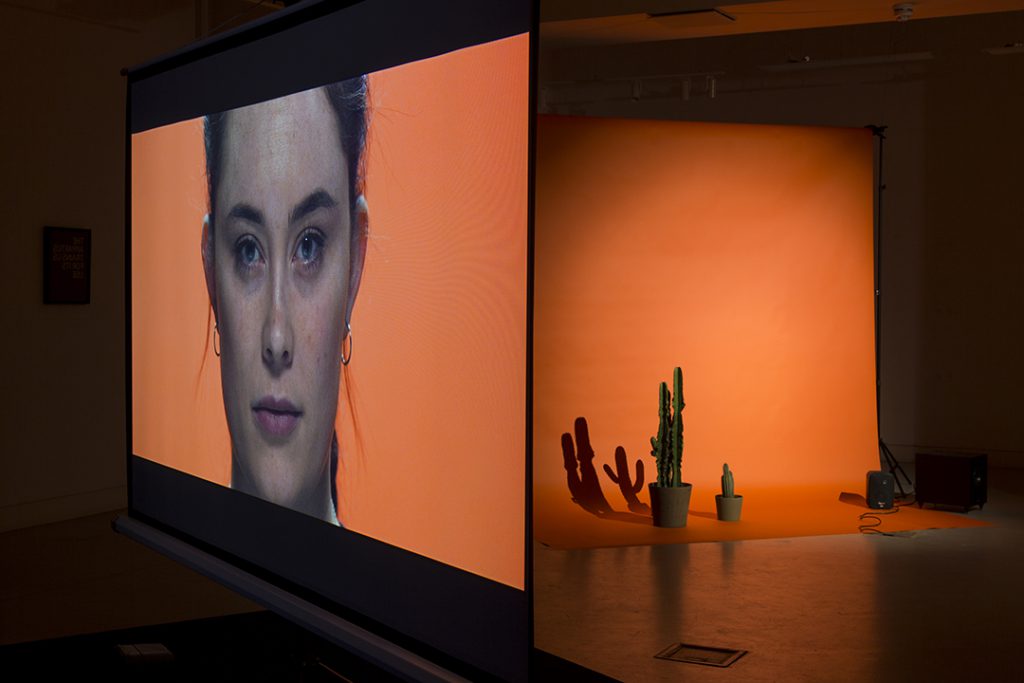 Slow Violence is a video and installation that encourages us to think about the power of noise – the surplus visual and aural information which surrounds us daily. It does this by drawing attention to the mental space that is created when this ‘unwanted’ information is removed.

In the film, Kihlberg & Henry propose blinking as one way that we can temporarily screen-out visual noise, and invite us to compare the shutting and opening of our eyes to the experience of watching 35mm slides as they jolt in and out of darkness. When a slide vanishes from view in a darkened room, it temporarily leaves a negative imprint on the retina. Images carry intensity, and intent. They ‘work on us’, as the film says, but to what end?

The video’s narrative follows four youths who discover and activate a slide projector carousel, which then becomes a kind of script, steering their actions and helping them to recognise the way that architecture, signage and music can influence their bodies and minds. It draws attention to cigarette warning images, and their placement on ‘neutral’ cigarette packets, coloured almost black, like the back of your eyelids. By doing this, Slow Violence looks at the images and sounds that the ‘noise’ of daily urban life might imprint on us.

The work is approx 25 minutes long on a loop. Visit at any point during opening times.

Karin Kihlberg & Reuben Henry are artists working with moving image, performance, interdisciplinary research projects and publications. Their work speculates on how technology influences the mind, and the structures shared by cinema, architecture and language. Kihlberg & Henry have been collaborating since 2004 and are based in London.

Previous works include include The Order of Things for the Great North Run, A Mountain Close Up is Only Rock, for FACT, Liverpool also exhibited at Danielle Arnaud Gallery and internationally in Australia and Sweden, and This Building, This Breath, a moving image with live voice piece for fig-2 at the ICA, both 2016, and which exhibited at Plymouth Arts Centre, Camden Art Centre and The Grundy Art Gallery aided by an ACE National Touring Grant.

Thanks to Arts Council England Grants for the Arts, and the Elephant Trust.