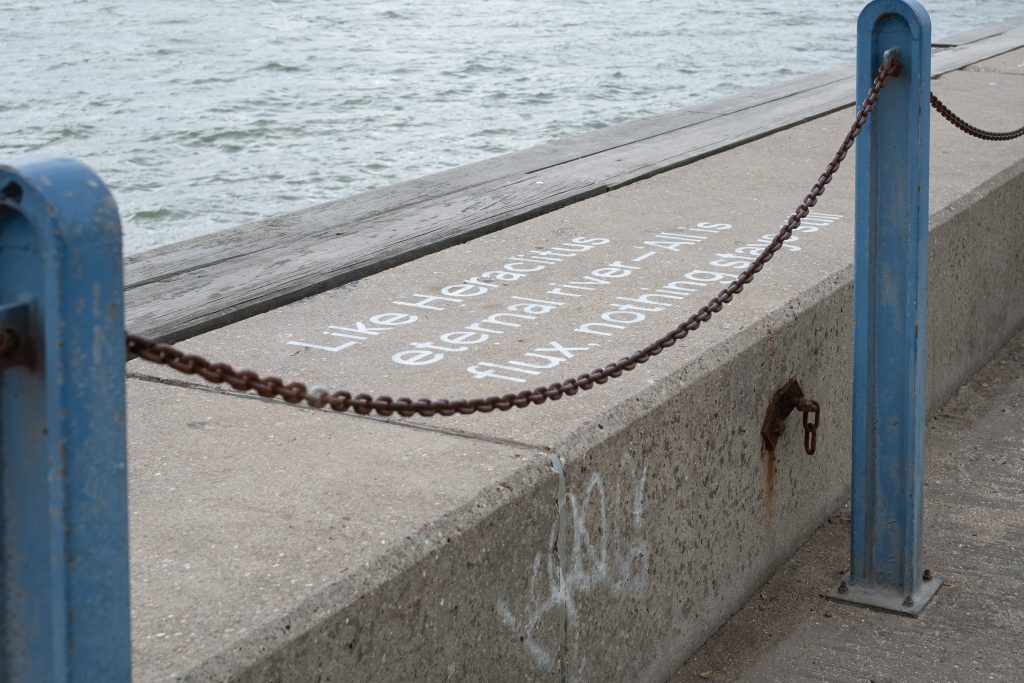 “As poet-in-residence for Whitstable Biennale 2022, my immediate vision for how poetry could become an indelible part of the programme brought together five considerations: Whitstable’s landmark harbour; the town and its citizens; the estuarine meeting of its waters; a desire to embed poetry into the materiality of the festival’s sites; and the overarching theme of the festival, Afterwardness, inspired by Mimi Khalvati’s haunting sonnet of the same name, a term originally coined by Sigmund Freud to define the belated understanding of past events that coalesces with the passing of time.

The quest to embed poetry into the festival’s materiality was a rich provocation to all the poets whose words appear, and means that you will encounter poetry in unexpected ways during your time at the Biennale.

Through its poetry programming, Whitstable Biennale is greeting so many cultures, communities and countries. The heritage of the featured poets spans Iran, Argentina, Ethiopia, Ghana, Pakistan, Jamaica, India, Ireland, England, Nigeria, Brazil, Italy, Zimbabwe, the Netherlands, China, Poland, Austria, Canada, Zambia and Somalia. And we are all British. It has been thoughtful, playful and joyful to curate Whitstable Biennale 2022’s poetic offerings. I hope you’ll enjoy them as much as I have when you meet the poems too!” — Dzifa Benson

Dzifa Benson
@ Wooden Jetty (near West Quay)
A new poem written especially for the festival appears and disappears with the tide, on a wooden jetty that juts out into the sea on the pebbles of the beach next to the West Quay.

Denise Saul, Dzifa Benson, Nasser Hussain, & Nii Ayikwei Parkes
@ Whitstable Harbour (Flags on boats)
These poems include thoughts on a mother’s death, anti-black racism, and lost cities, and venture out to sea and return to harbour on the flags of cockle-fishing boats. With many thanks to Cardium Shellfish.

Leo Boix
@ West Quay
Avid open water swimmer Leo Boix’s Haikus for the Pandemic are juxtaposed against the NO SWIMMING signs that warn people off at the West Quay.

Mona Arshi
@ Sundae Sundae
Mona Arshi’s little gem of a poem, The Humble Insistence, melts into your soul with your ice-cream.

Dzifa Benson
@ Frank
A QR code leads to a reading of I Told It to the Sea, in an unexpected place.

AT THE OLD BANK

Bohdan Piasecki, Dzifa Benson, Jamie Hale, Karen McCarthy Woolf, Nasser Hussain, Patrizia Longhitano, Sandeep Parmar & Yomi Sode
@ The Old Bank
Eight poets have contributed deeply affecting poems about the nature of love, which are to be found emblazoned on the boarded-up windows of an old bank on the High Street.

Joelle Taylor
@ The Old Bank
The poem colony, contemplates the colonisation of the female body, drawn out across a room.

See the festival programme for details of poetry performances and workshops.