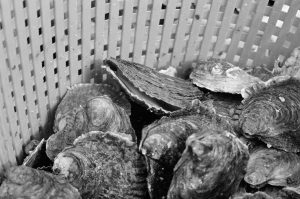 Shot on black and white 16mm film and presented as a short film as well as printed in the form of a kinescope or flip book, Oyster is a minimalist documentary/cinematic poem showcasing the native oyster and various aspects of its life and consumption. Shot underwater in its natural habitat off the Whitstable shore, then detailing the process of harvesting and consumption, Oyster looks to celebrate British aquatic life, as well as the unique history and commercial legacy of the native oyster. Simple in approach and construction, the honest beauty of the black and white image and the familiar gestures within each scene engage with our collective sense of heritage and tradition, while questioning how we imagine the sea and our relationship to it. Oyster explores the form and fragility of the oyster, the oyster trade, and ultimately the future ecology of its habitat, while being experienced as an avant garde work, bringing elements of modernism and abstraction to its natural subject.

The accompanying flip book reconstructs the basic principles of filmmaking, whilst presenting another aspect of the oyster’s life. An average film moves at 25 frames/images per second. Flip-books mirror film, containing roughly 60 images which, when flicked through quickly, appear animated.