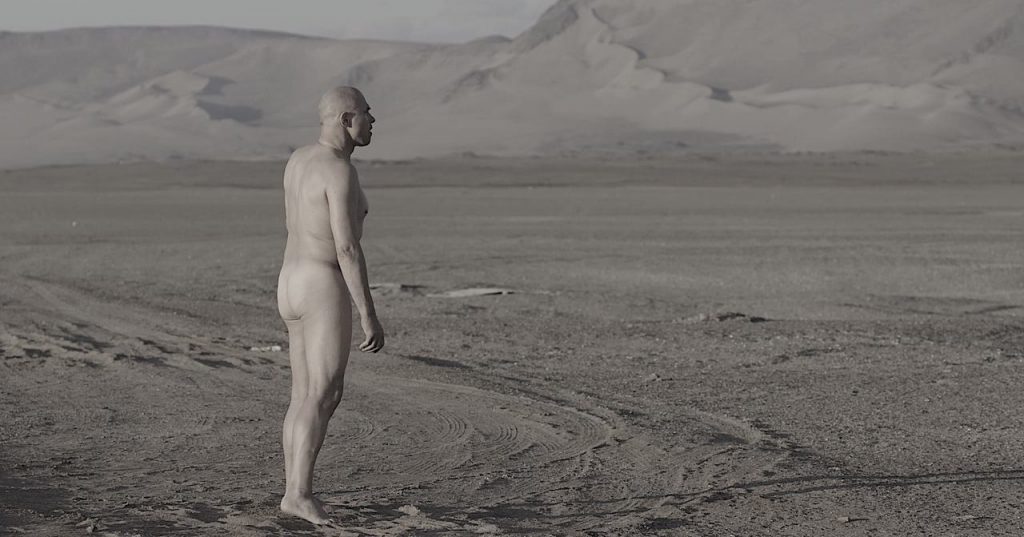 Andrew Kötting, Lek And The Dogs (production still), 2017. Image Courtesy of the artist.

Experimental artist and auteur Andrew Kötting creates a ground-breaking crossover between narrative film and contemporary art piece, based on the award-winning play by Hattie Naylor. The film is inspired by the true story of Ivan Mishukov, who walked out of his apartment at the age of four and spent two years living on the city streets where he was adopted by a pack of wild dogs. In a recession-ravaged city, the child’s world was dominated by deprivation and violence; his only hope was to turn to feral dogs for company, protection and warmth.

Kötting’s spellbinding and utterly original story of survival draws on a range of innovative techniques, including home movies and archive to produce a montage essay on the state of the world. Lek, played by the French performance artist and actor Xavier Tchili and who starred in Köttings two earlier feature films, This Filthy Earth and IVUL returns with a mesmerising performance of a man close to the edge, buried under the weight of his own existential terrors. With trace elements of Tarkovsky’s Stalker and Samuel Beckett’s Krapp’s Last Tape the film sends the protagonist, Lek into a zone deep underground only to see him surface in the deserts of northern chile.

Ultimately the film inhabits a foggy no-man’s land between documentary and fiction, essay and narrative whilst at the same time probing for answers to the universal questions of Where now? Who now? When now?

Now we come to it: resolution, dissolution. Lek and the Dogs might seem to be adapted from the stage play, Ivan and the Dogs, by Hattie Naylor. But it is nothing so straightforward. Anyone ‘collaborating’ with Kötting understands: you can feed a few provocations into the process, and have the odd line cannibalised and mangled for your pains, but the final cut will be entirely his, something rich and strange. And unexpected, even by him. Or especially by him. If he knew where he was going, he’d never get out of bed….

The nuclear family is undone, the bomb has dropped: unnoticed. History has ended and the city carries on. Lek is an orphan in a bunker, a rubbish-mound scavenger, an interspecies dog in rags. The family has collapsed with the world around it. Lek has his device, his cassette recorder, with which to play Beckett: ‘sound as a bell’. Patrick Magee is gentled and sad. The language is cod-Russian, gramlot. It is pained and eloquent. And meaningless. Body-sounds, throat vibrations on which anything can be imposed. Beyond this darkness, and the legend Lek improvises – ‘she wants me to tell my story’ – nothing is left but poignant archive: machines, demolition, futile marches, waste. And packs of feral dogs haunting the margins. Foetal things squirm and twitch. The ice floes from Ivul return in a new context, invoking northern shores where nuclear submarines rot.

‘They said he had a disrupted mind.’ The doctors and scientists comment in white laboratories. Alan Moore’s voice is like the recording of a prophet long dead, a forgotten value system, buried under the foundation stones of a ruined cathedral or pompous parliament. Lek’s authentic memories are Xavier Tchili’s home movies: his wife, his child, a birthday cake. Human affection and leaking light. The film becomes its own archive and the archive is truth.

The film is 90 minutes long and will be followed by a Q&A with Andrew Kötting and Gareth Evans (Whitstable Biennale film curator).

Lek and the Dogs is released by HOME from 9 June.
homemcr.org/film/lek-and-the-dogs

With thanks to Jason Wood and HOME, Manchester.