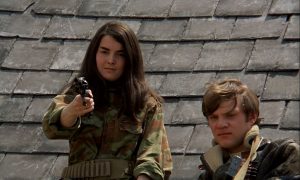 “A modern classic in which Anderson minutely captures both the particular ethos of a public school and the general flavour of any structured community, thus achieving a clear allegorical force without sacrificing a whit of his exploration of an essentially British institution. The impeccable logic of the conclusion is in no way diminished by having been lifted from Vigo’s Zéro de Conduite, made thirty-five years earlier. If… was also a timely film – shooting began two months before the events of May 1968 in Paris.” (from Time Out)

O Lucky Man! screening on Tuesday 5th at 15:00, and Britannia Hospital on Sunday 10th at 17:30. Programme notes available at the three screenings. Part of Thinking Creatively. After 1968, a Trilogy of Resistance by Lindsay Anderson, Malcolm McDowell and David Sherwin, in memory of David Sherwin (1942-2018).

“…by 1985 Sherwin was trying to claim dole, only to be told that he was ineligible because he “thought creatively” for more than 24 hours a week”.
(From The Guardian)