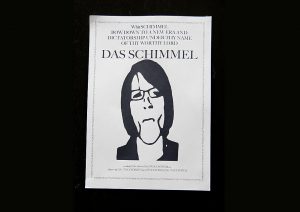 Herman Rarebell III has recently woken from a three-year long coma, only to find his closest friend, formerly an interior designer, has risen to become the god-like cult figure Das SCHIMMEL. Herman must prove his worthiness in a string of endurance tests across Whitstable.