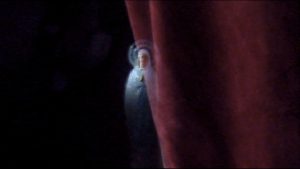 In the lead-up to the Whitstable Biennale 2010, Alex Pearl wrote what he calls a ‘sort-of vampire novel’, based on Bram Stoker’s Dracula and in the form of a blog. The blog was posted on the 2010 edition of whitstable2018:8888 and was based on an initial misunderstanding about where the character of Dracula was supposed to have landed (Whitby, not Whitstable); a confusion that was compounded by Peter Cushing’s close relationship with Whitstable.

The narrative of the blog, which Pearl calls an “aimless ramble through forest of coincidence and disappointment”, connects the two sets of films that were presented in Whitstable.

Ghosts, a three channel projections,showed ghostly apparitions, and was born of an interest in Hammer Horror and and interest in Victorian theatrical magic. The split-screen piece, Call, shows a male bingo caller addressing the women of Whitstable’s Oxford Bingo Club.