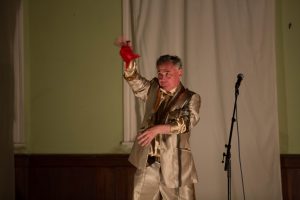 Williamson’s performances often challenge conventional ideas about ability and disability, using a mixture of humour and antagonism. He invites us to focus on his speech – or lack of speech, and his hearing – or lack of hearing. In a previous performance he stood onstage having a dialogue with a puppet’s head, whose whispers in his ear he would then dictate to the audience – a reworking of the classic ventriloquist’s stage act. He will often create situations that put him in difficulty and that make audience members want to help him, all the while exposing the darker side of this desire to help another.