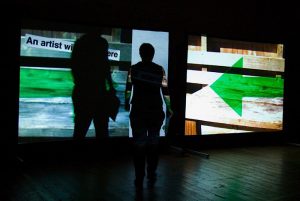 Artist Emma Hart was commissioned to work over two Biennales, culminating in an extended project for 2012. Emma Hart Projects the Future marked the first stage of her involvement.

Through video Hart devises anarchic processes for the moving image, and hijacks its projection as the stage for performance works. For Whitstable, Hart conceived a new double screen projection, which interrupted video with live action. It involved scripts, pointing and pre-recorded footage, which smashed through the conception that a video camera records the past. Instead, Hart’s resulting performance projected the future.