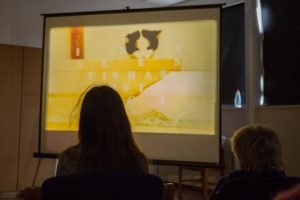 Children’s Films is a new long-term project conceived by artist Gareth Moore in which he has invited five international artists to produce short 16mm films for children. Ulla von Brandenburg, Keren Cytter, Geoffrey Farmer, Julia Feyrer and Harrell Fletcher were free to focus on any subject matter of their choice with the only guiding framework being that their works were to be screened exclusively for children. Moore brought together the five contributions into one episodic film, adding his own opening and closing credits, which was screened in various public spaces around Whitstable. Acting as a producer through the commissioning of the films, Moore characterises Children’s films as a form of transient cinema that travels from town to town, growing with new contributions over time, offering a unique cinematic experience for children. Moore bypasses the usual levels of mediation by which children typically engage with the work of contemporary artists in institutional education programmes, and engages directly with the demographic on their own terms.