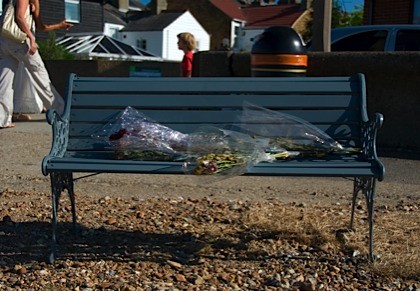 Working across music, text and performance, Swedish artist Annika Ström presented a work in the open spaces of Whitstable. The jocular or even boisterous streak within her multifarious practice was playfully drawn out in this work conceived especially for the Biennale. Taking the ubiquitous park bench as a performance site, Ström offered a space for reclusive, intimate or even collective activity. The work was part offering, part deception. Presenting an alternative way to look at Whitstable, Ström questioned whether one could be bored in such a place, and whether boredom could be put to creative use. The work was ironically positioned as an ‘event’, and thus a co-optive arrangement in which participants became the willing (and in some cases unwilling) actors of the piece.