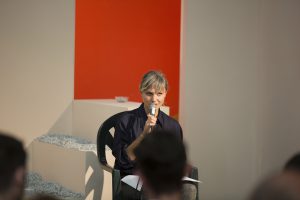 Cara Tolmie presented a new performance extending material she had been developing for the film work Pley (2013). The set from the film, a free-standing interior construction, was reconstructed in Whitstable harbour’s boat shed, which became the locus of two staged encounters between Cara and three other ‘strangers’ – played by a group of musicians.