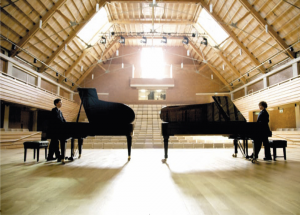 Twelve minutes long, this new film incorporated a musical composition specially written by Beer for the architecture of a new concert hall. Scored for two trebles and two pianos, there are no pianists involved; instead the sustain pedal is held down, and the trebles sing into the open grand pianos, without ever touching them, building chords and a harmonic progression which resounds throughout the pianos and around the empty concert hall. Made in association with Sevenoaks School.