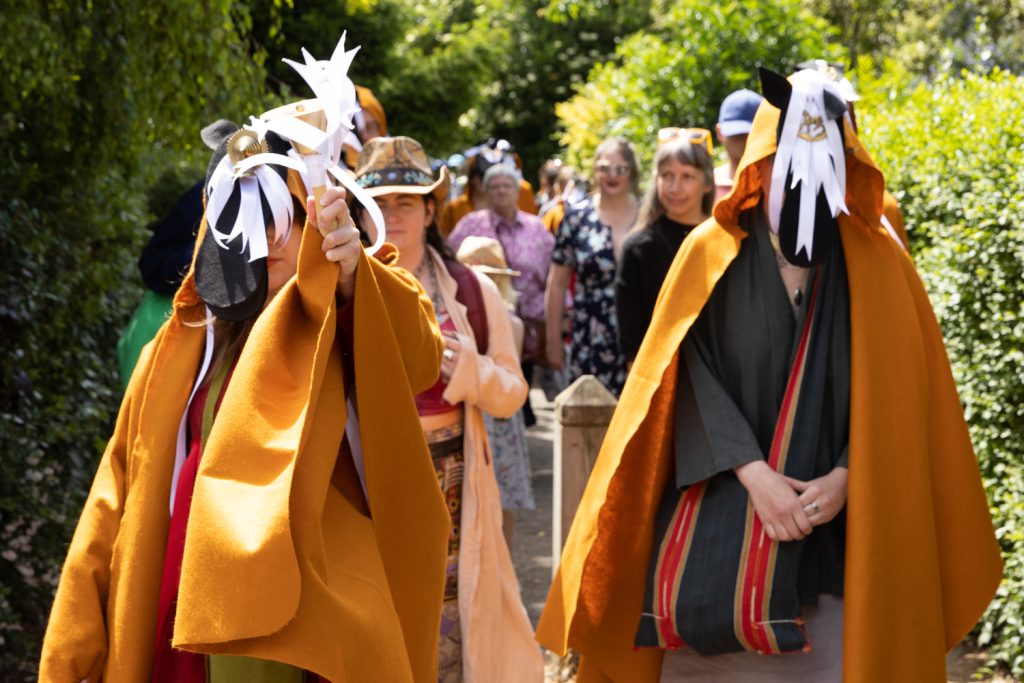 This video documents part of Arianne Churchman‘s When We Were in Horseback, a new work performed at Whitstable Biennale 2022. It’s available online for a limited time.

A performative walk in which Whitstable became a stable for unstable and tangled collective histories. When We Were in Horseback invited visitors to don the cloak of the hooden horse and join a procession through the town, tracing the shape of a horse through collective shared actions, song and the sound of bells.

Drawing on the imagery of ancient hillside chalk horses, the spectre of the white horse in Kent and the Kentish folk tradition of hoodening, When We Were in Horseback is part of a series of works by Arianne exploring the social and political contexts of the horse in folklore.

The work centres on the act of hoodening, in which an individual is concealed in sackcloth or a horse blanket, and carries a snapping wooden horse head on a pole above them. This horse is joined by other revellers who perform acts of song, dance and folk plays in exchange for money and goods in the quieter winter months.

Whitstable’s hoodening tradition makes an unseasonal break with tradition, appearing at May Day each year. When We Were in Horseback seeks to further explore this seasonal rupture with tradition, entwining and corrupting histories in search of new collective fictions.

“We slip on the cloak of the hooden horse and pull up the hood. Atop our heads sits a snapping horse’s head. We look ahead and see it blend with our vision, pushing our lines of sight out to the side. We walk as a herd to the sound of bells, brass and song, white ribbons flowing from our necks, flickering at the ghosts of Kentish horses that adorn the streets and our feet mark out a fleeting outline on the pavement.”

Find out more about Arianne’s work at ariannechurchman.com. 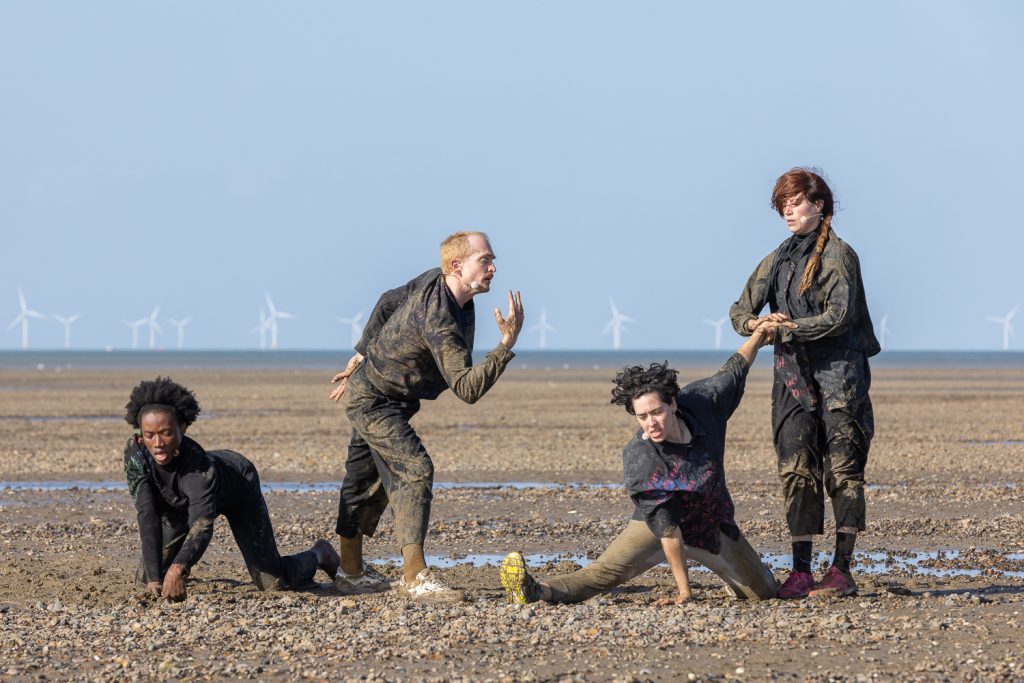 This video documents Nicole Bachmann‘s shell of hope, in cycles, a new work that premiered earlier this year at Whitstable Biennale 2022. It’s available online for a limited time, until Friday 9 December.

shell of hope, in cycles brings together movement and voice to explore the forming of subjectivity and relationships in our present time.

The pressing issues of Brexit, hostile immigration policies and water pollution inform this performance work, which took place on Seasalter beach – an area intensely affected by these same matters.

Thinking about how emotions manifest in (this) space, four performers represent the states of mind connected to grief, anger, fragility and optimism, and create a narrative of continuous and osmotic separateness and togetherness, unfolding in a polyphonic embodiment of perspectives on being a migrant.

Rather than breaking language in an act of rebellion, the work attempts to create a new story that intertwines with the one of the sea, another essential character in this work. Water, which brings us together and separates us, holds the atavic memory of everything in the world. It has a mood of its own and a natural inability to contain any border. Its fluidity and dark depths offer solutions, in the best feminist and new materialism spirit, beyond the binary thinking of white patriarchy which has led to catastrophic outcomes regarding pollution, and the vulnerability of the coastal environment.

In shell of hope, in cycles, this awareness merges with the embodied narratives of migration in the natural setting, leaving us to wonder about our positioning in this matter.

In addition to the relationship between the bodies, there’s a focus on the voice, forming a chorus, at times concordant and dissonant. This amalgam of voices adds to the intensity of the piece, whereby the audience participates in the voices ‘being taken into account’, or otherwise, not being heard.

Nicole Bachmann is represented by VITRINE. Find out more about Nicole’s work at vitrinegallery.com and nicolebachmann.net.

Supported by The Swiss Arts Council Pro Helvetia, and The Swiss Cultural Fund. 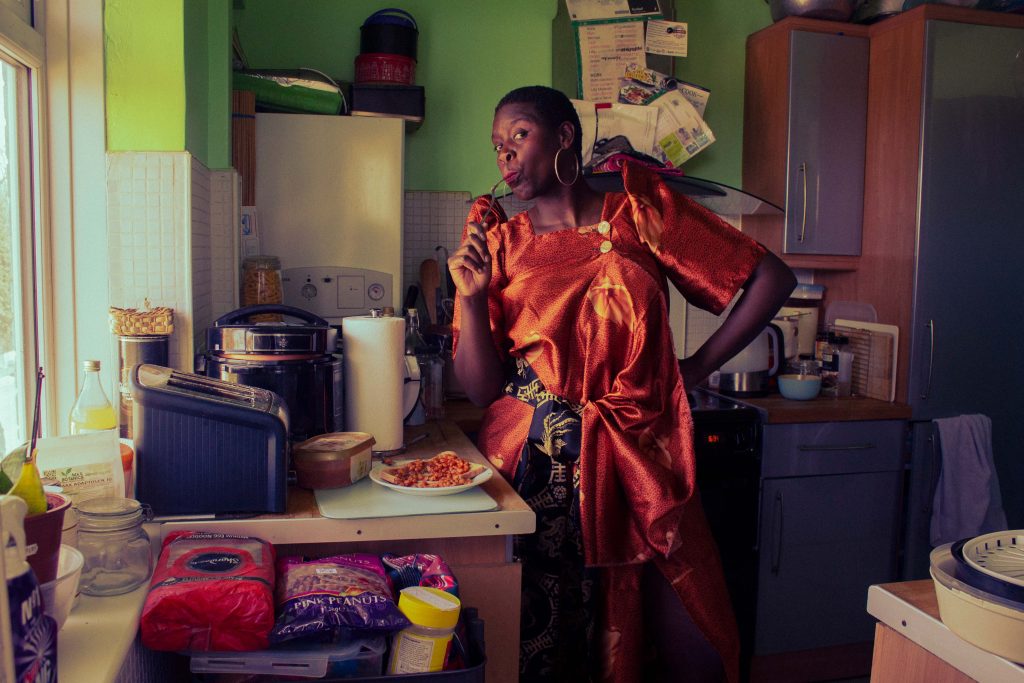 Listen to the audio

Anna-Maria’s installation, described below, was destroyed by fire on 26 May. She says: “Twelve months of mentoring, nine months of hard work and a lifetime of heart was stored in The Cockle Shed. With the ashes still warm I’m holding firm and responding to this moment with an audio work that speaks to the act of trying to create a celebration of Black Joy and that advocates for a work that no longer exists. A work that carries the pain, the exhaustion, the community, the love and the joy I still hold for The Funnest Room in the House and all it represents.”

Taking inspiration from the kitchens of Anna-Maria’s childhood and those of her diaspora peers, The Funnest Room in the House invites visitors to travel through time and space to explore a Black British kitchen collected from many pasts. These intimate spaces were individual to each family’s life but were also a performance of collective culture, containing expressions of ancestral homelands and nostalgia for back home, mashed up with British culture.

This slice of social history is quietly disappearing, for the most part unrecorded, with kitchen renovations filling skips around the country and links to homelands feeling further and further away as elders pass on to become ancestors. The Funnest Room in the House joyfully brings these kitchens into the spotlight, with playful interventions that track the changing roles that have always taken residence in the kitchen from the 1980s to during the lockdowns of the last two years. If visitors linger and make themselves at home, the kitchen will reveal surprises that give space for celebration, joy and healing through nourishment, dance and movement.

The audio work, originally intended to be listened to while walking around Whitstable Harbour, from Dead Man’s Corner to West Quay, is now available online for a limited time.

If you have a story about a Black British kitchen that you would like to share for the next iteration of The Funnest Room in the House, please get in touch with Anna-Maria here.

A special thank you to my partner Dan Hope for all the love, support, hard work, labouring and driving on the original work and this version.

Massive thank you to Deanne, Joy, Claudine, Claudette, Lilly, Lea for sharing your special memories and stories and the beautiful folk who I met via Facebook marketplace.

Thank you to Andy Beauchamp for leading on construction, Ted Barrow for sound design and Robin Crowley for Fridge fabrication of the original installation.

Thank you to Chris, Will, Darragh for driving, van drops and kitchen hauling, Khadija for donating so many objects that were destroyed and Alex and Hayley for donating the first kitchen.