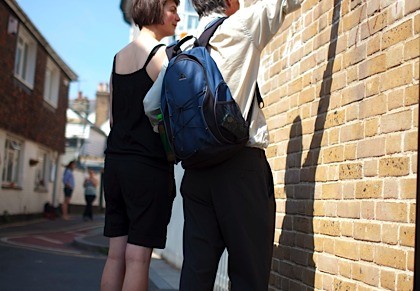 Artist Lottie Child brought her ‘Street Training’ project to Whitstable. Working with the physical and social architecture of the town, she hosted a tour, which was led by a group of young ‘Street Trainers’ drawn from the local area. The workshop interrogated the ways in which everyone can affect their public space.

Participants were led to observe, analyse, intervene and play throughout the urban environment in which they moved. Through sophisticated and organised guidance strategies, the workshop was regarded as a contemporary martial art, rather than an organised interruption of public space. Child also developed publications, websites and guides as part of this extended project.